I'm not sure if Fanny ever went anywhere near America, but of course by the time she was pulling the partwork together in the 1970s, America was coming over here with a vengeance. Or at least the food was. So, Fanny being Fanny, she had to include a nod to our Stateside cousins on her culinary ladder, and the American Club, or 'three-decker', Sandwich appears to be it! She scarcely needs to give instructions for it, but simply cannot help herself... 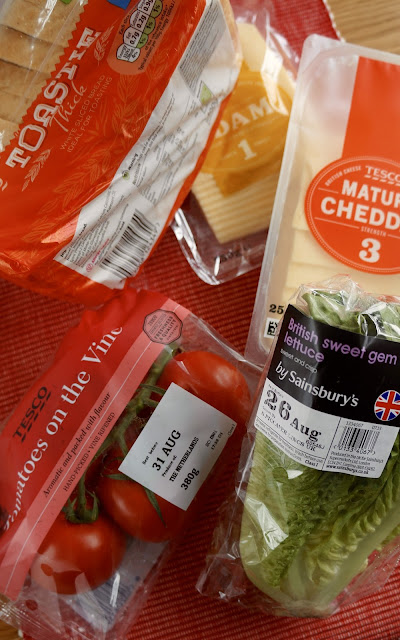 According to Fanny, and according to generally accepted patterns, the American Club Sandwich should be made with toast, sliced tomatoes, hard-boiled eggs, lettuce hearts, real mayonnaise, thinly sliced mixed brown and white chicken flesh and bacon. This appears to be the reason Fanny feels the need to explain it however, as according to her, what can be found in 'less reputable restaurants' is generally anything but! 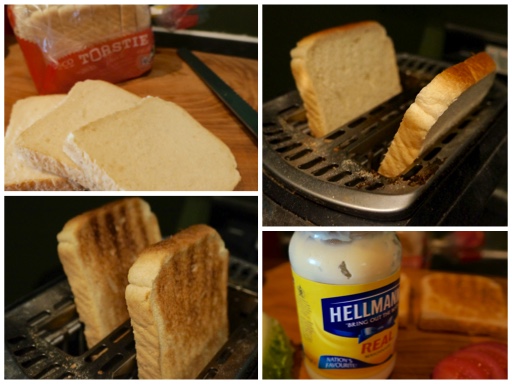 Wherever Fanny has been tucking into her Club Sandwiches, she seems to have been served 'revolting bottled wallpaper paste masquerading as mayonnaise'. She probably wouldn't be best pleased with my jar of Hellmans then? It is labelled as 'real' mayonnaise however. It seems to get worse, her sandwiches have contained rather tatty bits of outsized lettuce. That's not the worst of it, the chicken has been replaced with scraps of rabbit and one or two rag, tag and bobtails of the coarsest streaky bacon. I'm sticking with cheese. 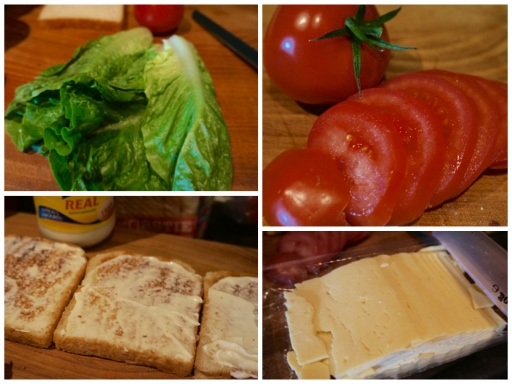 Fanny reckons, if made well, the Club Sandwich is one of the most filling and most delicious you are likely to come across. The toast must be made fast under a pre-heated and very fierce grill or it will fly apart when handled and somehow constitute a peril 'once again' for people with bought teeth. Luckily I still have all my own, but although my toast is made fast, it is made in the toaster. 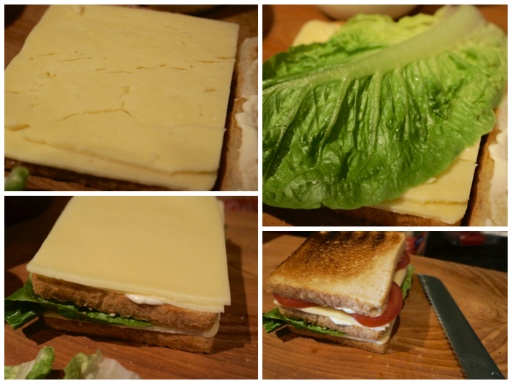 As I'm avoiding the chicken and the bacon, I need not pay heed to Fanny's advice that they be economically used, with the chicken the merest shards from the carcass and the bacon definitely not in brine. My cheese slices are fresh from the pack, and on offer (two for £2) at the supermarket, surely that will do. Fanny might approve after all, she says at the end of the day practically anything can be made to make a Club Sandwich. Being American, they simply cannot be considered to be 'classic' and therefore we can do anything we like with them. Thanks y'all. 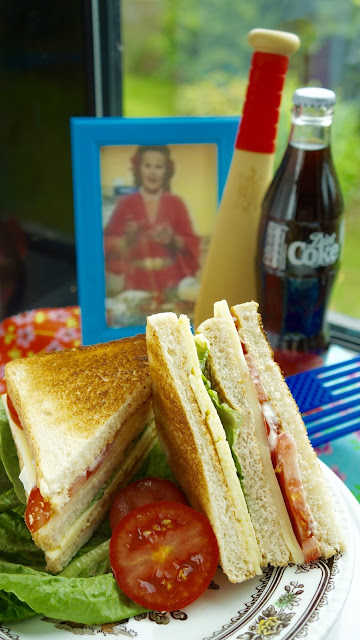 Roll Out The Beryl!

I'm very excited to learn that a new authorised biography about Beryl Reid is about to be published - so excited that I just had to speak to the author, Kaye Crawford, to find out more, and of course uncover if there were any connections to Fanny! There must be...

"They were so different but, of course, Beryl was rather a gourmet herself. She absolutely loved cooking, and hosting dinner parties. She even went so far as to publish her own cookbook, Food and Friends, a collection of recipes interspersed with memories. Fanny gets a few mentions in my book! Beryl's niece recalled a rather disastrous dish Beryl attempted one Christmas that I'm sure must've been a Fanny creation. It was called Oeufs en Gelée, Boiled Eggs in Aspic! It was apparently revolting." 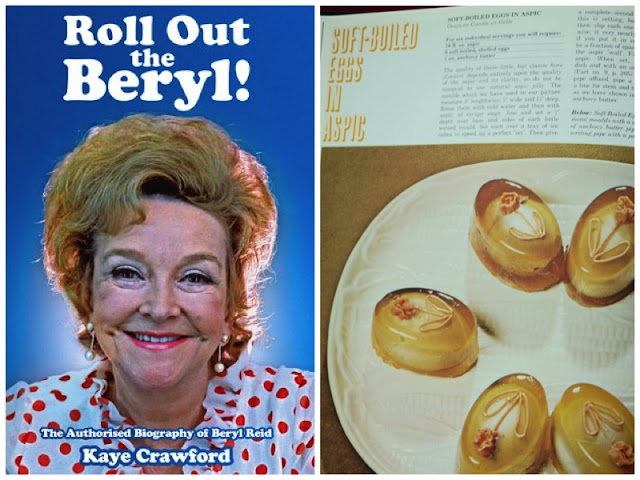 Yes, it is one of Fanny's very special favourites, I'll be making them soon, perhaps to enjoy while I read the book! This picture of them makes me smile - will I be smiling when I read your book?

"Oh I hope so! Beryl was such a complex lady, very unconventional and totally unique. I've tried to get behind the laughter and see what the real Beryl was actually like. There's laughs a plenty though, with Beryl there couldn't be anything else! The book came about by accident really. I was in the middle of moving house and had to wait around for an electrician, so I just grabbed the first book on my shelf which was Beryl's 1984 autobiography, So Much Love. It's a wonderful book, but Beryl didn't write it, she dictated it to a chap called Eric Braun, usually after they'd shared a few glasses of brandy! As I read through it, I thought 'I'm sure there's more to this lady than meets the eye' and I wanted to find out more."

We all do! Fanny will be forever remembered for cooking soufflés in a ballgown, but she only ever did that on stage in the 1950s - have you uncovered any popular misconceptions about Beryl that you can share with us?

"In the book I talk about the 'Beryl Reid myth' - there's this idea that Beryl was a reclusive lesbian with 50 cats, an alcoholic who lived in a strange cottage in the middle of nowhere, and only played mad old ladies. But of course, there's absolutely no truth in any of that! I think most people assumed she was a lesbian after the 'Sister George' role. She was passionately against any form of prejudice or bigotry - in her own words, 'I don't care if you're black, yellow or bright purple, but I do care if you're a bore!' In fact, when two elderly ladies came to see her after a show, they said 'Oh we love you Beryl, but we didn't like that Sister George thing you did, we thought it very vulgar!' To which Beryl replied, curtly, 'Too close to home was it dear?'"

I think I would've enjoyed Beryl's company! Fanny and Beryl both appeared on television Game Shows in the 1970s - do you think it helped their careers or just played into their 'characters'? Or was it just for fun?

"Beryl was an absolute workaholic, but it came from a rather fragile place. She would make herself extremely ill, refusing to take a holiday, taking everything offered to her. She would say 'I just don't want them to forget me'. She absolutely loved panel shows, especially Blankety Blank. She kept going back because she adored Terry Wogan. When Beryl left, Beryl left too. She felt it would be disloyal to him to go on. But you know, all you really needed to do to get television magic with Beryl was to give her a glass of something and leave the camera on her..."

A little drink always works well for me, camera or no camera... Did Fanny and Beryl ever meet do you think?

"I don't know if they ever met, but in Beryl's personal archive there's a rather haughty letter from Fanny, inviting - or is it more of a command? - Beryl to come to the Cradock home for a cocktail party. Fanny mentions that she adores Beryl's work, but then commits a cardinal sin and suggests that if Beryl did come, it would get the party (and therefore Fanny's new book) a nice bit of publicity. That was exactly how NOT to get Beryl to attend something! I believe Fanny got rather short shrift in response."

I can only imagine! The book, like Beryl, just sounds like a hoot, what are your hopes for it?

"It's twenty years since Beryl died. I was concerned that she was in danger of being forgotten. She deserves to be remembered. This will sound trite, but I can honestly say that in the time I spent 'with' Beryl, I came to absolutely adore her. So I took her 'don't let them forget me' as a sort of obligation. I want people to connect with her work, but also, to take something positive form her story, which is 'keep going!' I think the BBC should put together a tribute night, maybe even a drama, wouldn't that be wonderful? But then, I would say that!"

Roll Out The Tribute and the film I say!

Roll Out The Beryl! by Kaye Crawford is released on August 22nd by Fantom Film books and can be pre-ordered here. Kaye will be giving away a collection of Beryl goodies, including a signed, dedicated copy of the book to one lucky winner - be sure to follow Kaye and Fantom Films on Twitter for more details! Thanks to Kaye for the lovely chat, and permission to use the lovely photos from Beryl's own collection. Can't wait for the book!
Posted by Keep Calm and Fanny On at 12:32 8 comments: