A Potted History of Cheese

Fanny Cradock has decided that the time is right. We've been through a lot together. Different ingredients. Different skills. Different techniques. We don't even need to mention all the different colours. We've done it all. Well, almost. Fanny has saved a particularly important aptitude to impart to us until now. We are ready. We are excited. We are cooking with cheese. 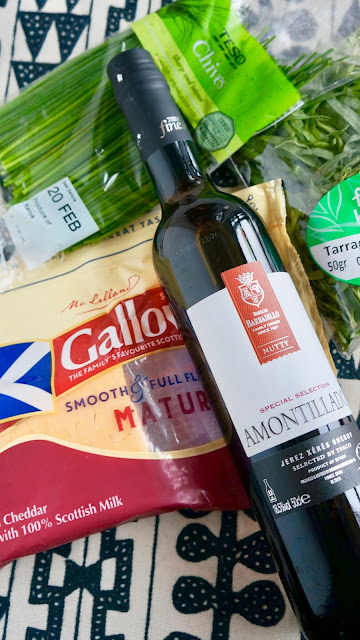 Leftover cheese is not something which features heavily in my life, I have to admit. Fanny however has an idea from Ye Olde Days of Old for that challenging time when perhaps my refrigerator is blessed with more cheese that I can handle. My first reaction would be to simply eat it, however Fanny has a much more sophisticated solution should I find myself in such a pickle. Pot it. 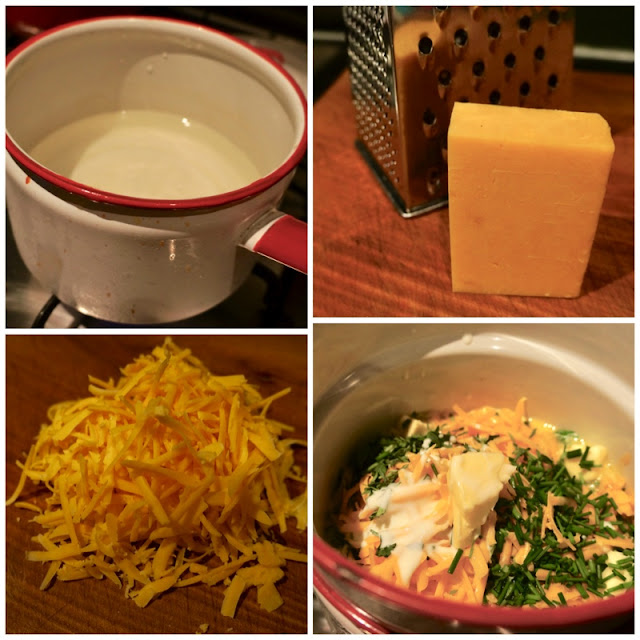 For this preserving technique, Fanny chooses Cheddar. First of all Fanny would like to clear something up. A fallacy. According to her, Cheddar was NEVER matured in caves at Cheddar Gorge. They are simply too cold and too damp for the job. Fanny says that English Cheddar is the best in the world. Cheddars of other countries are considered inferior. My Cheddar is Scottish. 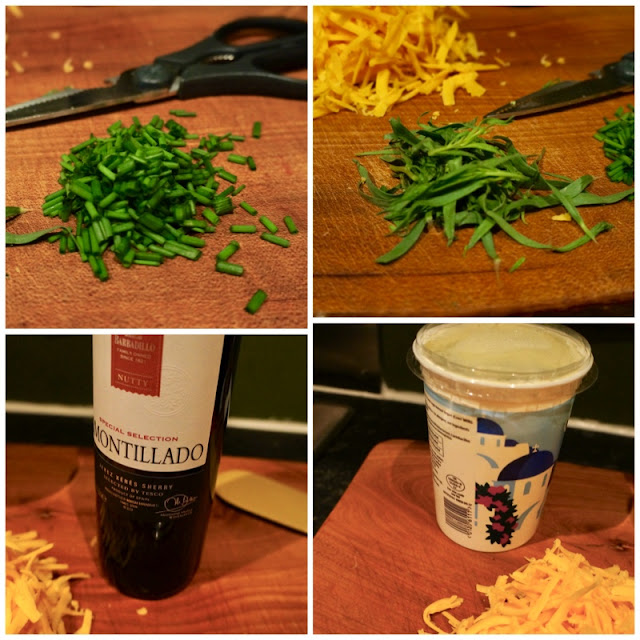 Fanny reckons that there is only ONE Scottish cheese on sale which is worth mentioning at all. Dunlop. It responds very well to being creamed down, apparently, with half it's weight in butter and the classic alcohol of the country it comes from, whisky. Fanny tells us that Dunlop was first made in 1688 by a dairy woman, Barbara Gilmour, and is an excellent cheese for toasting or for an imitation fondue. I still only have Cheddar. Scottish Cheddar. 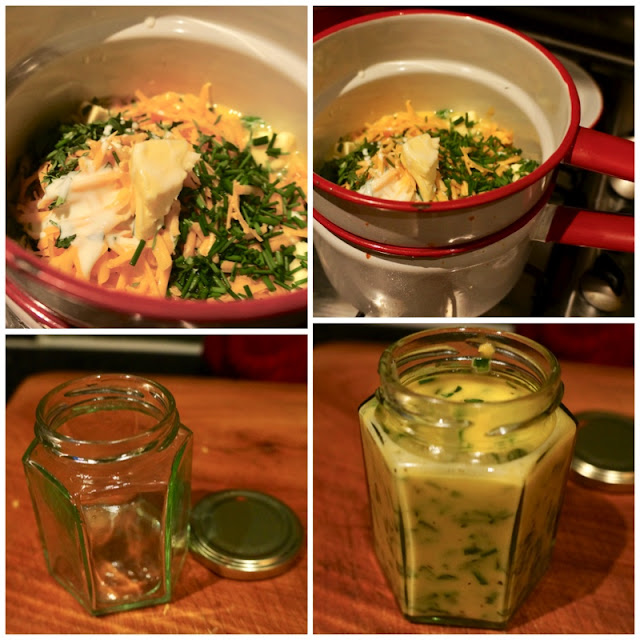 To 'pot' this already inferior cheese, Fanny grates it and adds it to a double-boiler with a tablespoon of thick cream, a few tablespoons of sherry, some butter and quickly scissored chives and tarragon. Fanny stirs the mixture over a gentle heat until it turns creamy and pale green in colour, before adding seasoning. Straight into sterilised pots, packed in well and covered with a covering of clarified butter when cold and then a well-fitted lid. Preserved Cheese. It still will not last long in my hands, but it is a super oomph in the savoury stakes and perfect with toast. 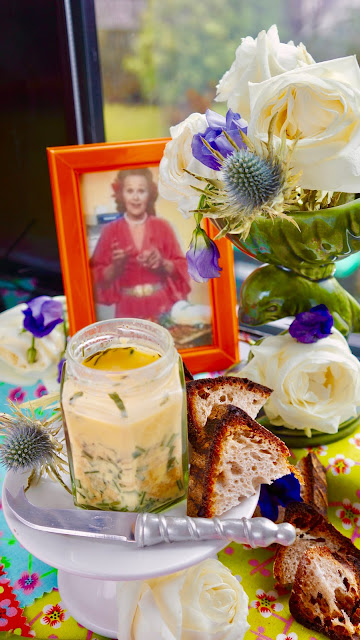 Fanny Cradock had a chequered career off screen, as well as a chequered life. One of her many and varied careers was as a food demonstrator, convincing the housewives of Britain, at Ideal Homes Exhibitions and the like, to ditch their old cookers and install a brand spanking shiny new Gas one instead. It had to be Gas. She said she never cooked with anything else, she simply wouldn't trust it. She was of course sponsored by the Gas Board throughout her career, and she remained loyal - even repeating the same line on her final television cooking performance on TV-AM in 1985. Another face appearing on TV-AM in the early days was food demonstrator, retro-lover, Fanny-fan and all-round appliance expert, Jenny Webb. Had their paths ever crossed, I wondered...?

I never met Fanny but saw her on stage a number of times. An absolute enthusiast, entertaining and an exceptional communicator. Fanny and I operated in different worlds – and she was, of course, very much in a league of her own. Throughout my career, my world was not just about cookers, but all domestic electrical appliances. I was involved in developing test specifications in conjunction with the IEC and BSI, lecturing, writing and/or advising and being interviewed by the media and the public. As The Electricity Council's National Home Economist I also advised the home economists of each of the regional Electricity Boards (NORWEB, SEEBOARD etc) before they were privatised in the 1990s. Cookery demonstrations were a part of my early years in the electricity industry, having studied ‘domestic science as it used to be called... 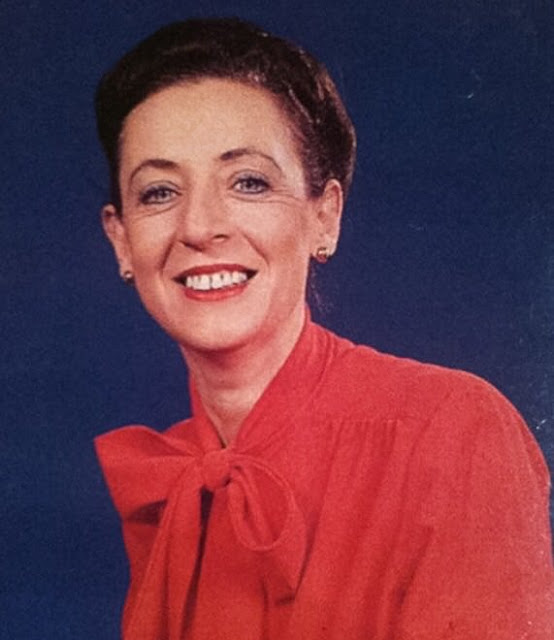 What was the rivalry like between the gas and electricity appliance people, if any? Do you still cook on electric today?

My home is totally electric as I had the gas disconnected when we moved into the house in 1965 as I felt that if I was in the Industry I should practise what I preached!  The Electricity Council employed one of Fanny's biggest rivals, Marguerite Patten to represent the use of electricity for cooking. I also wrote a recipe book with Marguerite, where she advised on conventional cookers and I wrote the microwave recipes. 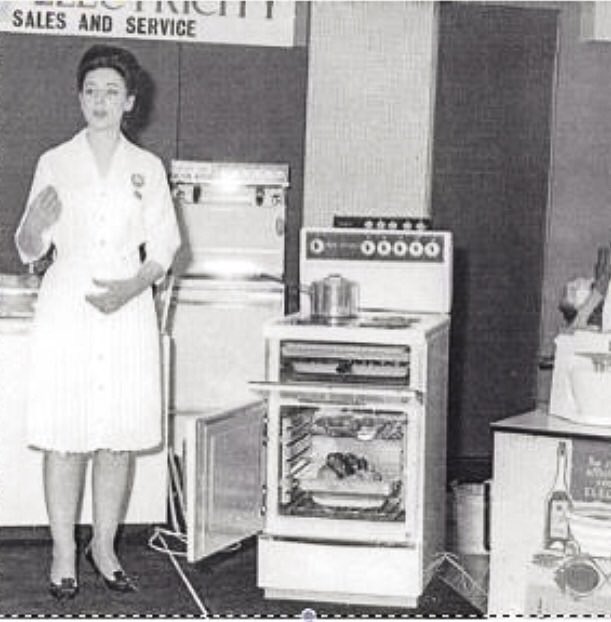 Fanny published over 100 books, including over 45 cookbooks, many of which covered ‘new’ things such as Cooking with Foil or perhaps using Tinned Goods - but never Microwaves - her last cookbooks in 1985 would’ve been her only chance I guess. Perhaps she was waiting for the Gas Microwave to be invented! What do you think about the current or recent ‘trend’ for Microwave cooking - Microwave Mug cakes and things like that?

In 1985 only 14% of homes had a microwave. As I understood the technology and construction, plus with my background I was able to educate the public through my books and magazine pages. Initially I read and tested recipes from American cookbooks to familiarise myself and then developed recipes for the British needs. New developments are always interesting and exciting and younger people can use their own knowledge to meet the needs of today. 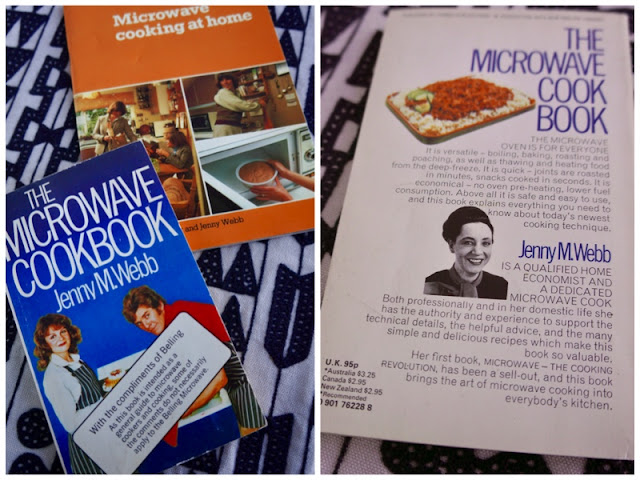 Things spread so quickly on Social Media these days - you have a great presence on Social Media - I love your Twitter and YouTube videos. Fanny too was a great communicator, but obviously social media wasn’t around in her time. I think she’d be ALL over it though… How do you find it? Do you think it’s helping to bring retro back?

What a shame Fanny isn’t around with her own YouTube channel today - she was a total one-off. But I must confess, I was initially hesitant about putting my TV back catalogue on YouTube, yet I’m now so delighted I did. However the success of my retro channel has amazed me – not just in the UK but also the USA, Australia and Europe! I never imagined that I’d end up back in front of a camera either! But the success of all my old clips, sparked my TASTES OF THE 70s series being filmed especially for YouTube. It was actually all shot in just one-day involving a lot of hard team work. It was a lot of fun too – with me running up and down stairs changing my genuine 1970s frocks, whilst trying to retrieve the clip on microphone from goodness knows where... I can now exclusively reveal to you that there are some out-takes left over from filming – dare I put my blunders on YouTube?! 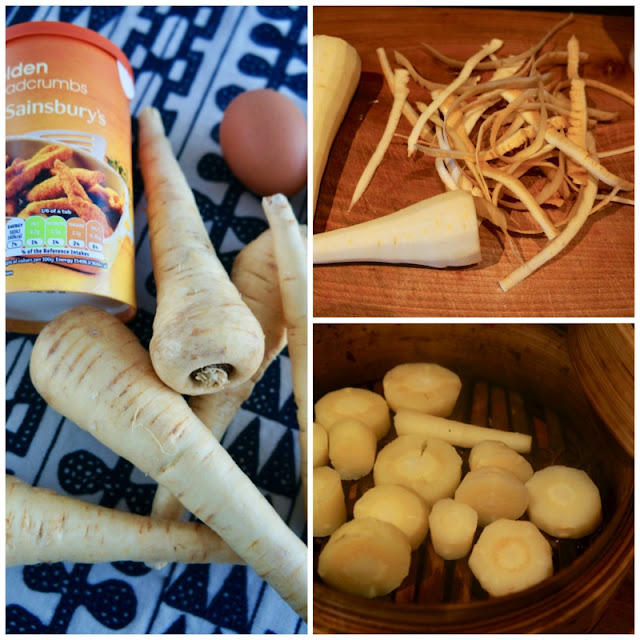 Of course - I'd say you must! Now I have a confession Jenny, please don't scold me the way Fanny might've... I’d normally cook up one of my guest interviewees recipes to include on the blog, but, erm, although I have your books, I don’t, gasp, have a microwave! Do you have a favourite retro recipe that I could make?

Choosing a favourite recipe is difficult but like most, Prawn Cocktail is one of my favourites as you can see on YouTube. And here's a retro recipe for you - easy to make and a versatile addition to many a mealtime. Parsnip Balls. Simply mash cooked parsnips, add some melted butter, milk, seasoning and a beaten egg. Form into balls and then roll in more beaten egg, breadcrumb and fry. Delicious. 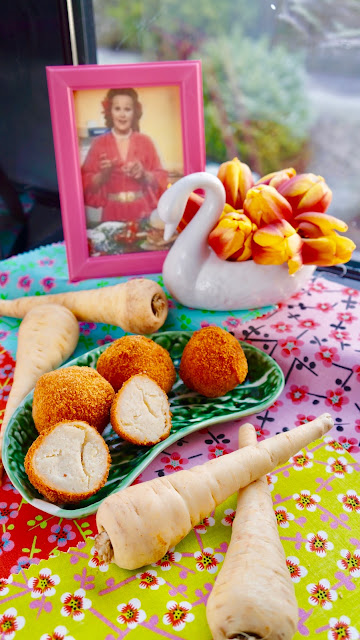