Decor-ation, that's what you need

When I was young, Easter was all about the decoration. Our excitement didn't come from collecting more chocolate eggs than we could possibly consume, it was much simpler. We spent months (okay it may have just been weeks) planning our adornments, thinking about our designs, and collecting up paints, pens and paraphernalia to transform our very ordinary hard boiled eggs into wonderful creations that would surely outshine all others. Then we'd roll them down a hill and smash them. 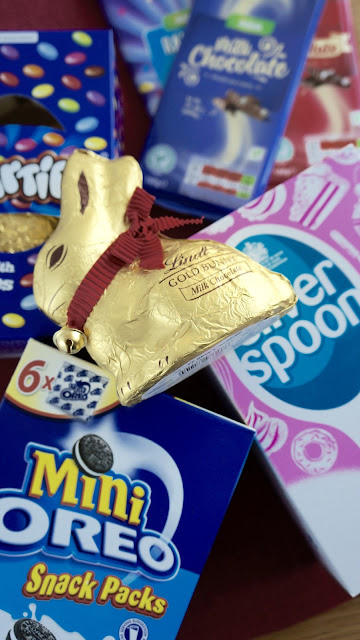 I'm sure we did get a chocolate egg or two as well. They were simple ones, small and filled with only a few Smarties or such like. Nothing too fancy. Fanny would've been horrified. She clearly sees Easter as a time to go completely overboard on chocolate decoration. The sky's the limit, apparently, now that we have mastered the very basics. The world appears to have caught up with her aspirations now. The shops are full of every kind of decorated cocoa product you could imagine. Twitter is awash with sky-high piles of Creme Eggs atop cakes, drizzled with more chocolate and sprinkled with whole chocolate bars. Even Fanny could never have imagined. Fanny wanted us all to fabricate chocolate worlds that didn't exist really to brighten up our Easter celebrations. 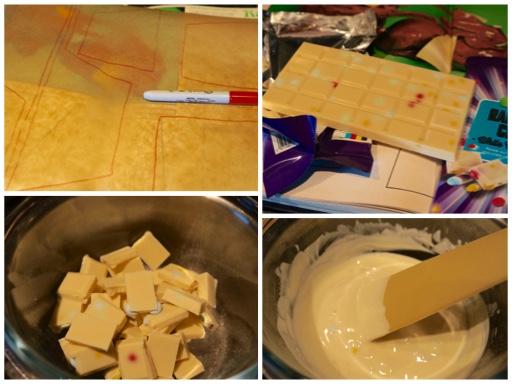 We know by now that Fannys' world is a strange one, and Easter is no exception. She hopes that we'll join her in making some 'glamourous' Easter Eggs, attractively presented 'at speed'. All tiddled up and fancied, controlled only by our own time and available expenditure. The partwork is awash with templates to trace onto ordinary greaseproof paper to make our chocolate creations. What Fanny has in mind is, naturally, a giant chocolate Rabbit pulling a chocolate cart filled wth a chocolate egg which has been covered in Royal Icing. It's what you were hoping for isn't it? 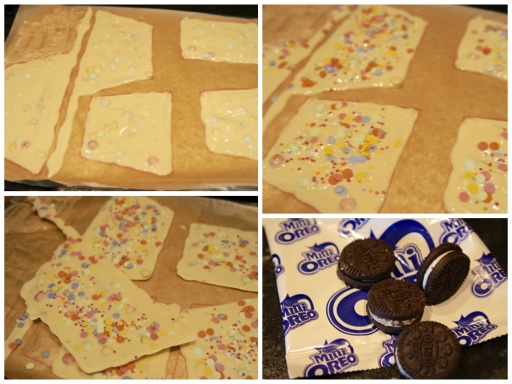 Fanny says we can make the most delightful Easter gifts, even though we may have so very little experience. The cart is made in four parts. Chocolate needs to be melted and carefully spread onto the templates, being very careful to get to, but not over the edges. Fanny does not approve of wobbles. I'm terrible at this kind of thing. My chocolate of choice for a cart is white, with rainbow pieces (small Smarties) hidden throughout it. Then sprinkled with sugar confetti, of course, left to harden and carefully removed from the paper backing and assembled. Fanny suggests small chocolate biscuits for wheels (the cart clearly needs these to move...) for which I have mini Oreos. I never even knew they existed, near mind how handy they'd be for this Easter scene. 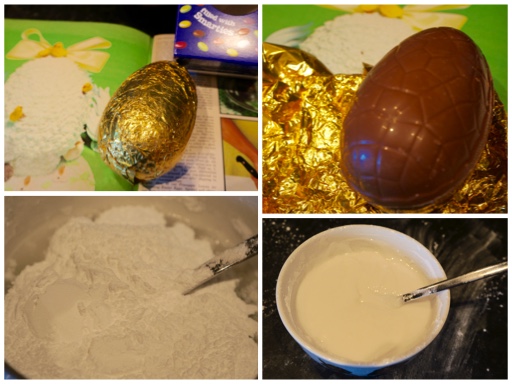 Fanny pops to the shop for the remaining items. Really. She buys a chocolate Rabbit to pull the cart. And a cheap chocolate egg to fancy up with Royal Icing to make a Snow White Egg. I can't for the life of me figure out who would want an iced chocolate egg, or why you would do it, but Fanny says it is the height of glamour, so... My chocolate bunny is a little small for his hand-fashioned cart, but I'm sure he'll manage to drag it to the top of the hill without many problems. I'm not so sure that the Royal Icing on the Egg will crack at all when it's shoved down the hill... maybe that's the point. 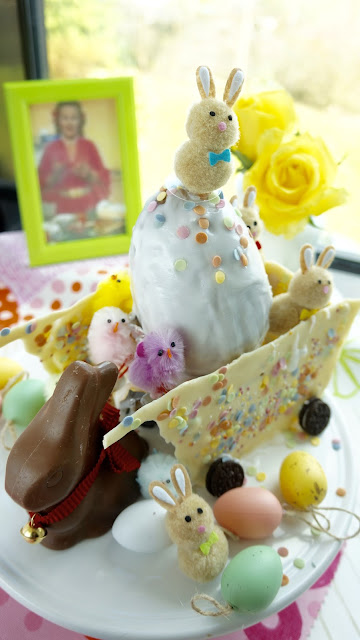 Fanny Cradock loves a festivity. None more than the feast following the fast for the faithful, frazzled, dedicated lenters that is Easter. The Easter partwork is a fanfare for the eyes too as Fanny goes into overdrive with the props, staging, colours and teeny tiny fluffy chicks. It's been a long lent of, well, mostly vegetables and eggs so who can blame her for a fabulous facelift of fanciness? Fanny the fashionista even has a springy new hairdo for the season, very froufrou. Incidentally, and somewhat flippantly, she does have huge hands doesn't she? 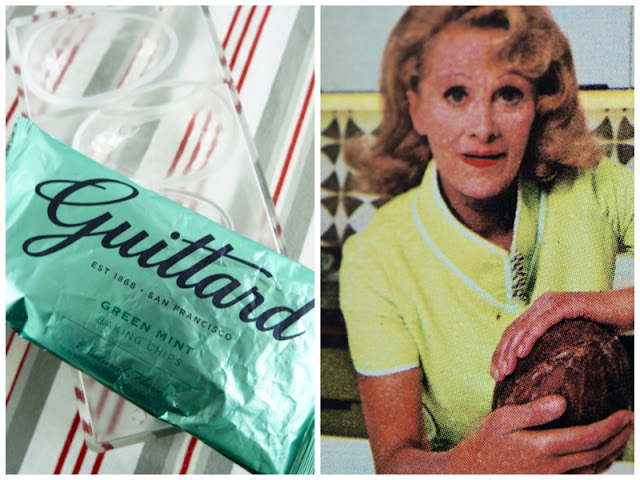 Fanny puts her feisty new do and mahoosive flapping hands to perfect use in a glorious pic-strip to show us how to 'play together' as we make our own chocolate Easter Eggs. At a fraction of the cost of shop bought naturally. She is sure that any famished youngsters in the house will 'squeal with delight' on Easter Day to receive one of her highly decorated fancily-finished Easter eggs. But first things first, we need to make them... Although Fanny claims these Eggs are easier on the hard-stretched purse than those to be found in the shops, you do need to shell out for a few bits and bobs to get going. Flim flam. The most expensive is possibly the egg mould. 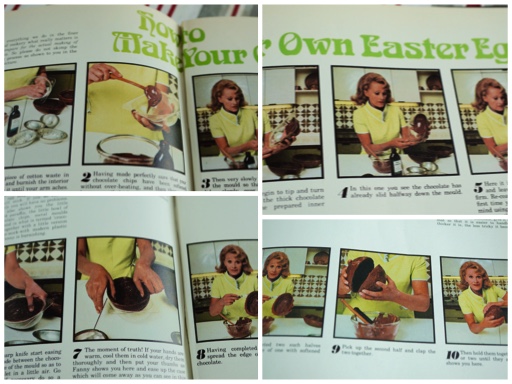 Fanny recommends an array of fiddly old-fashioned metal moulds (both in plain and 'crocodile' pattern) together with the easier-to-work-with modern plastic versions. I have a super-modern polycarbonate mould. Fanny demands that we set about burnishing the moulds ferociously with a little liquid paraffin, which Fanny finds much better than oil. Just a tiny drop, and rub, rub, rub as hard as you can until they are as slippery as glass, and you are fatigued. The eggs will flip out as if shelling peas seemingly. Fanny tries to reassure me that the fractional amount of paraffin would not upset the stomach of the faintest canary, but I'm still a little sceptical. The polycarbonate moulds really don't need it anyway... 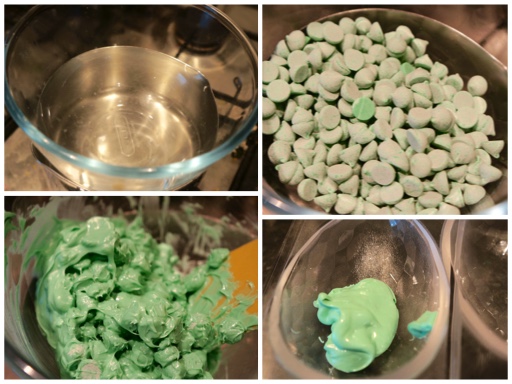 Before Fanny can get cross with me, I turn my careful attention to the chocolate chips, or couverture, which must be softened to a creamy consistency without letting them get hot. Fanny does hers in the warming drawer of her oven overnight to avoid a fiasco. I don't have one, so it's the trusty bowl-over-a-pan-of-simmering-water to avoid failure for me. I do hope Fanny would approve of my chips, they are gloriously and most fortunately green and flavoured with sweet garden mint from Guittard. I bought them in San Francisco. They may not *actually* be chocolate. They are described as 'baking chips'. They are definitely confectionary though, not McCains, for those easily confused. 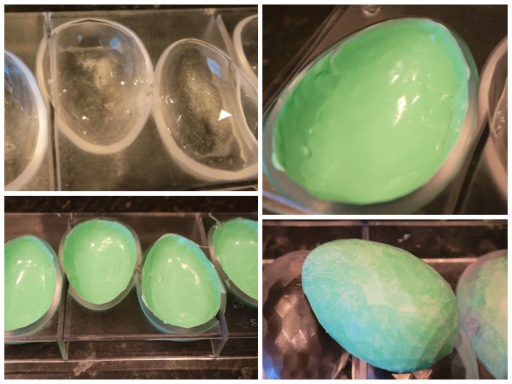 Once the chips are softened, beaten and cooled, Fanny ladles spoonfuls into the burnished moulds and very slowly tips and turns it to cover the surface. When set, she re-coats and 'if you don't mind using a lot of chocolate' Fanny says, do it again. 'The thicker it is, the less tricky it becomes' she tells us, presumably still talking about the chocolate. Once fully cool and set they should just pop-out without fracture. Mine do, despite the lack of paraffin-enabled moulds. Fanny uses a little softened chocolate as glue to 'clap' two halves together before decoration. Just simple for now, we shall deal with more 'glamorous' ideas next time. Together, of course. Inadvertently, the fluffy chicks look a little disappointed. 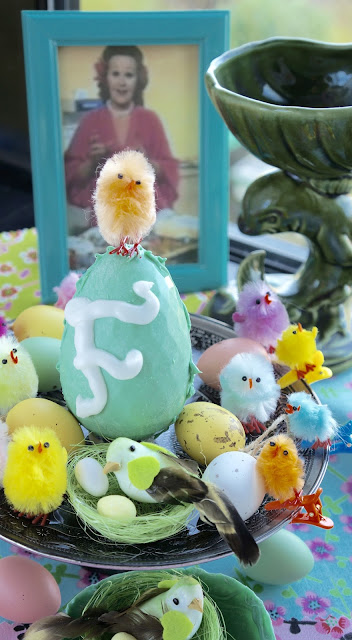 Certain Fanny Cradock recipes just keep popping up time and time again. In different books, on different TV shows and in different newspaper columns. She does them slightly differently each time. I like to think it's less her recycling old ideas, and more about reinforcing a set of core recipes that can be used differently for different occasions. She wouldn't be taking shortcuts to fill a show, would she? It would never be that she had run out of ideas, would it? Surely she wouldn't think we hadn't been watching properly before, would she? Her Rissoles are one such recipe. They get everywhere. 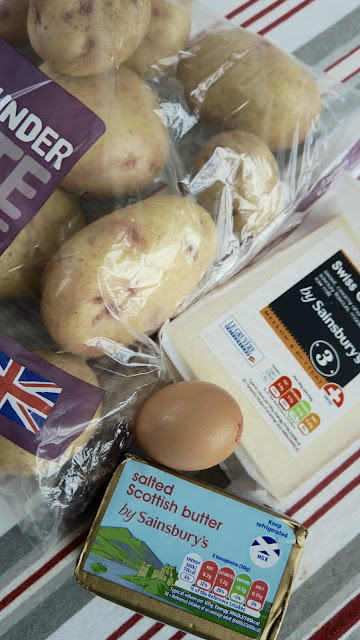 In the partwork she also gives them her favourite proper name. They are Fondue Frites. She doesn't discuss them, just presents them, after all we have made them together before. Many times. She introduced them on TV as part of her Adventurous Cooking series in 1966 and again when she invited us to her Cheese and Wine Party in 1970. After showing us around her glorious kitchen bursting with young assistants, she gets straight on with this hardly extravagant form of 'hot cheese' which is ideal for informal parties and buffets. It's disputable if they are of French of Belgian origin, Fanny never really decides. She is too busy explaining to us the real nature of the word 'fondue' which, she says. is a classical cookery term and not just hot cheese. Except this one, which is hot cheese. The ingredients are well known to viewers and readers alike. Duchess Potatoes. This time not dyed eye-popping green but simply steamed and sieved before butter is added. Fanny suggests chilling the mixture until it becomes stiff at this stage. At least in the partwork she does. On TV she just jumps straight in and adds the absolutely essential Gruyère cheese, for it must be Gruyère, eggs, salt and pepper. Except in the partwork it's two egg yolks only. In the booklets it is two egg yolks only. On TV it's one whole egg. Surely Fanny didn't get her own recipe wrong on TV, did she? 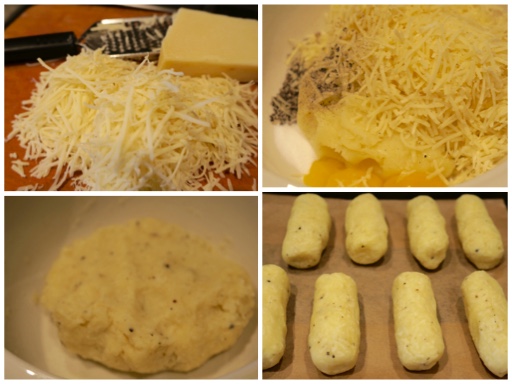 In print again she recommends chilling the mixture at this point. On screen she blobs the mixture into a dish of flour and shapes it very roughly into a 'fat sausage shape'. At least that's how she describes it. I follow the printed instructions of course, shaping my sausages when the cheese and potato mix is cool and firm from the fridge, not hot and sloppy. Or loose and flabby. Or however she is describing it at the time. And chill again. On TV when Fanny brings her shaped sausages out of ordinary refrigeration they are perfectly shaped anyway, so presumably it doesn't matter. Magic must be at hand in her kitchen. 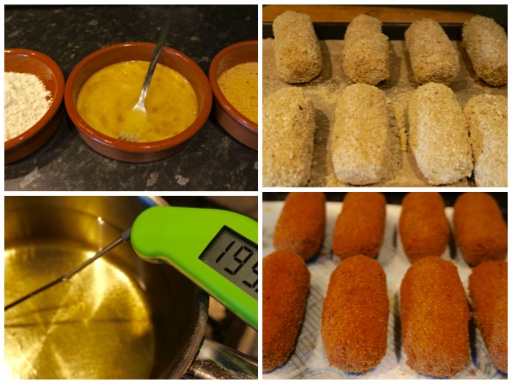 The shaped and chilled rissoles are then dredged in flour, beaten egg and coated with fine breadcrumbs. On TV Fanny does this once and plops them straight into the fryer. In print she is at pains to point out that this procedure must be undertaken THREE times. For only a triple coating will give a suitable protective wall for the delicate cheese and prevent it oozing into a gooey mess in the fryer. This would be failure. The oil must be smoking hot, so as to almost blind you, apparently. Fried until just golden and then transferred to the oven to finalise the 'fondue'. At least on TV. In print they are fried and well, just served, but still gooey inside. There seems to be many ways to make rissoles the Fanny way. They are cheesy and gorgeous, so we can forgive Fanny for the repetition, and (perhaps) the errors. My rissoles are all goo inside and no escaped ooze outside. No failure. Just like Fanny's. 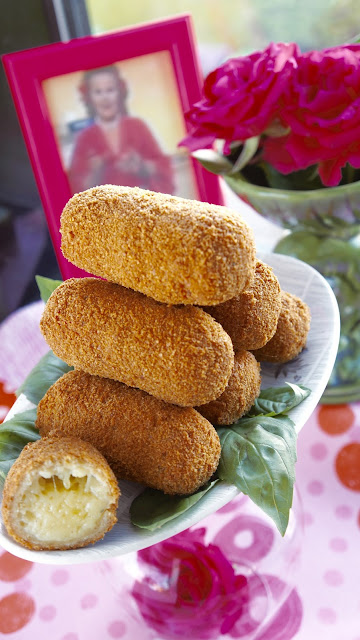