Fanny was always keen to get youngsters involved in cooking, and the weekly Cradock Cookery Programme was no exception - each installment included a page 'specially for small fry'. I'm not too sure what today's Junior Masterchef and Junior Bake-off hopefuls would've made of it, but for Fanny it was important that the young generation followed in the footsteps of 'their grown ups' and embraced the 'above all garnish and presentation' mantra. Fanny and Johnnie had already published several cookbooks aimed at young people, and had even produced a special children's cookery TV programme as early as 1959, which of course had it's own range of cookbooks to match - Fanny was never one to miss a marketing opportunity. 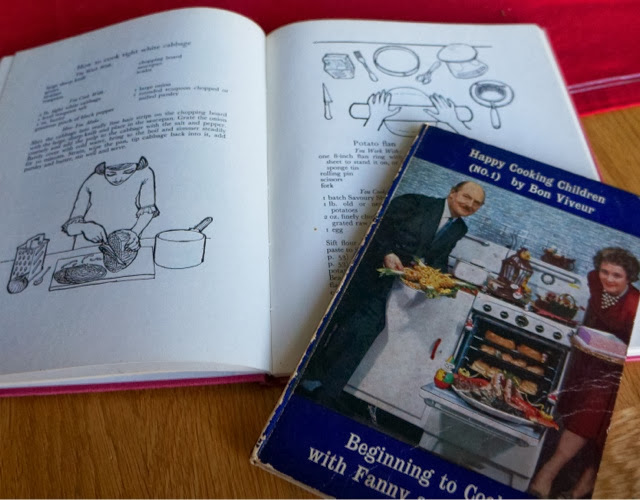 The first few ideas for the youngsters to get their heads around involve no cooking whatsoever, just assembly. Fanny kicks off with an idea for Stuffing Ducks. Fanny suggests that the grown-ups give their usual and ordinary stuffing used for birds or meats to the children instead to fashion these cute little ducks. The construction instructions are simple, wash your hands, mould the body, head and then finish off with an almond beak. I have used my trusty Vegetarian Haggis from Macsweens here instead, how do they look? 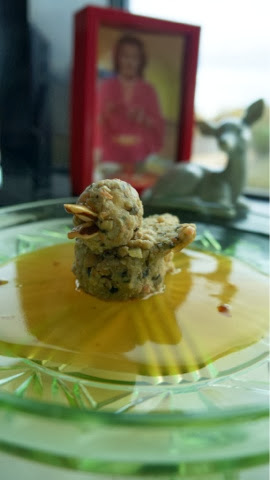 For pudding it's slightly more complicated as we attempt Edible Clowns. The youngsters are trusted to melt chocolate very carefully and mould it around a half orange to make a cup which is then released from the orange and filled with ice-cream. This is topped with a scoop of ice-cream and some chocolate petals to form a Pierots ruffle, a few chopped pieces of glacé cherry and a cone hat... Voilà the edible clown. 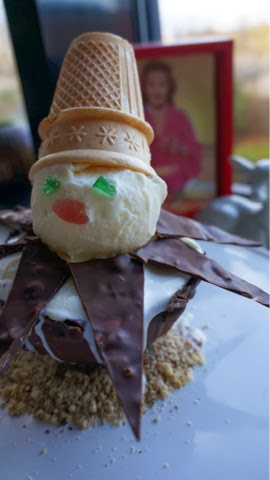 The final in this initial trio of treats for the young at heart seems decidedly risqué in appearance in this day and age, however I am hoping that Fanny designed it with innocence. I am worried that this blog will get banned as a result, but here goes. For Banana Candles, all you need is an ordinary banana, coated with strawberry jam, rolled in chopped nuts and stood up in a few pineapple rings. Oh, and topped off with a glacé cherry flame. I think bananas must have been straighter back in the 1970s, but even so how many parents would be able to keep a straight face if presented with these? 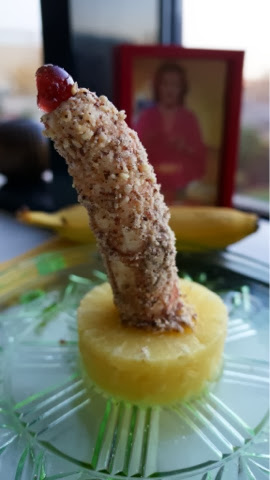 They all tasted just fine, and I am sure were a fun way to get young folk involved and interested in food. It will be interesting to see how Fanny develops the skills of these small fry as the parts progress, but for now I don't think we'll be seeing any of these creations on Junior Masterchef - which is a shame as I'd love to see those judges faces when presented with a Banana Candle... 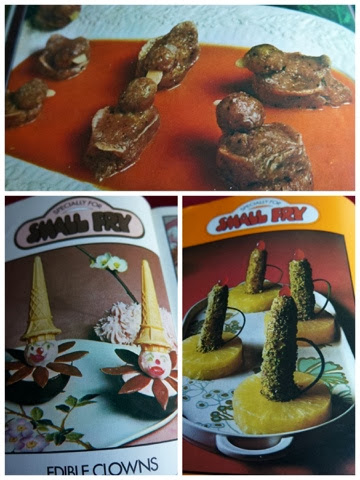