Fanny Cradock wrote an astonishing 40-plus cookbooks in addition to the 80 partworks of the Cookery Programme. It seemed a new book was never far from the shelves while she was alive, and no doubt were lucrative for her. Sadly you will never see a single 'new' Fanny Cradock Cookbook in shops today. Fanny promised that each and every recipe was tested and tested prior to publication to ensure that her recipes never failed at home. Surely she must've been bashing away in her kitchen night and day to test them all? Well, they were tested, but not always by Fanny herself. Why do all that tedious work if you had an army of poor assistants to hand? They didn't need to sleep after all... In addition, each cookbook often recycled recipes from one edition to the next. This final recipe in the Christmas Tea Time Treats 'part' is a prime example. It featured in her very first cookbook, The Practical Cook, from 1949 when she was just plain old Frances Dale. It's a beautiful book, lovingly illustrated in a style similar to Tom Hovey does for the Great British Bake Off. They popped up throughout the years time and again until her final cookbook, A Lifetime in the Kitchen - For Beginner Cooks, in 1985. Subtle alterations were made (reconstituted dried eggs were dropped) but more or less her version of 'Flapjacks' remained unchanged. 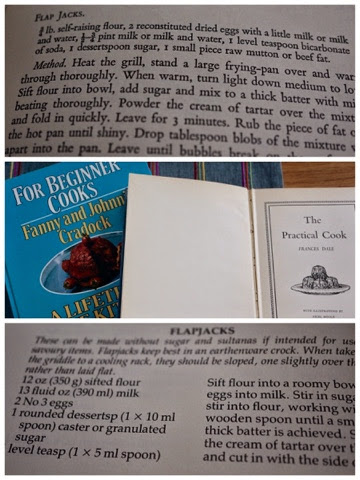 If you are expecting oats, butter, golden syrup, dried fruit and so on think again. Fannys Flapjacks are really pancakes. I've heard them called pan scones, or drop scones, but never Flapjacks. Flapjacks are just Flapjacks really. Fanny does like to confuse things. I love pancakes, they really remind me of my own childhood when we made them in all sorts of shapes - usually animals and people. They were one of the first things I ever remember making, eating and enjoying. I'm sure I'd bite the heads off first. 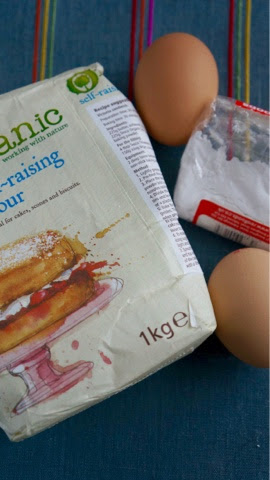 All the ingredients - flour, sugar, eggs and milk - are whisked up in a bowl until they are a thick batter. Then Cream of Tartar is sprinkled on, quickly but gently folded in and then the batter left for three minutes to rest. I rarely use Cream of Tartar on its own, but this must be the science bit. Meanwhile I get practical with the griddle pan, ensuring it's nice and hot over a moderate heat. 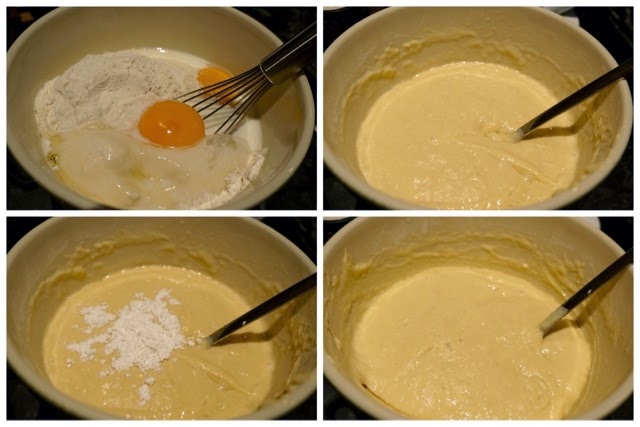 Fanny makes her Flapjacks round, which doesn't seem overly seasonal, or overly creative. Perhaps she'd run out of festive cheer. It happens, especially when you start the planning as Fanny does in January. November seems early enough. In tribute to my own childhood though, I make these ones in Christmas Tree shapes - humour me, that's what Christmas Trees look like round here, OK? I'm sure my poor Mum became an expert at making shapes by just dropping the mixture from a spoon onto the griddle, we didn't have disposable piping bags which make it a lot easier. 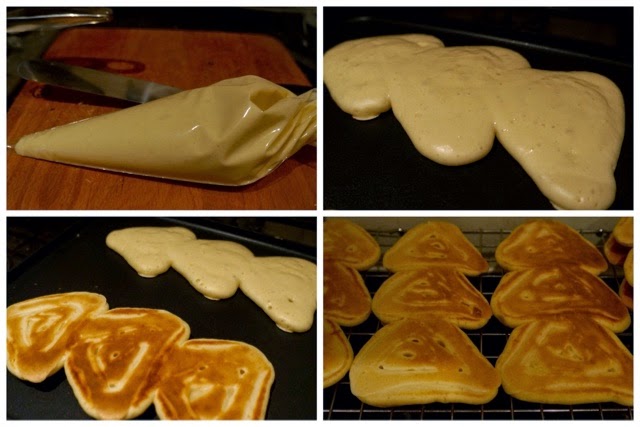 Fanny rubs raw, vegetarian unfriendly unsalted pork fat vigorously over the surface of her hot griddle 'until it is shiny' but mine is non-stick already and needs nothing at all. Phew! Tree shapes are piped and once bubbles start to break the surface - am sure this is another science bit - they are flipped with a palette knife for a minute or two on the other side. And that's it. They are dead quick, really puffy and hearty pancakes, I mean Flapjacks. I'll never get used to calling them that. Whether you are a Practical or a Beginner Cook Fanny has taught me you can always tiddle things up a little in terms of presentation, even when she herself doesn't bother. I cut interlocking slits cut into my trees, give them a thick dusting of icing sugar and voila they are a 3D Christmas Tea Time Treat which can be recycled every year. Maybe next year I'll progress to a whole nativity scene. Maybe. 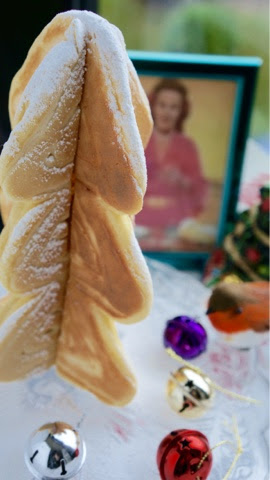