It's All In The Booklet #1 - Our Royal Mincemeat

I think I love Christmas time almost as much as Fanny does, and she gets VERY excited about the whole thing. For me it's a time to think about food, drink, friends and family... and Fanny! No matter how many times I have seen them, I still get so excited when her series Cradock Cooks for Christmas is shown on TV. This year it's being shown on the Food Network in the UK, so this special series of posts is in celebration of the shows, and of course the famous booklet which Fanny constantly refers to. So, grab your booklet, pop on your very best ballgown, pretend to decorate your tree, switch on the TV and cook-along for the perfect Cradock Christmas. 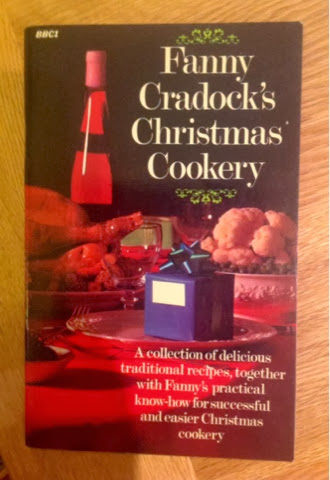 Fanny thinks it's such a pity that people only make mincemeat for one day in the year, and then forgot about it again until Christmas comes around next year. So, to reverse this trend she recommends making BUCKETLOADS of this 'Cinderalla of Christmas Cooking' and sharing with us a variety of special dishes to use it in... Aren't we lucky? Fannys favoured technique is to mix up the mincemeat ingredients, store them to mature and then cooking as required. When I've made it before I have cooked it then stored in jars, so chopping and swirling things 'pell mell' into a bowl, packing it into jars and storing it away well in advance is all new to me. Fanny insists this is done three months before required, and even better if it's left for a whole year. Lucky I was prepared! Fanny gets very cross with folk who make those nitty little individual mince pies, which she claims are really just a waste of time. Millions agree with her, she says, men hate them, they are a dead bore to make and always end up like British Rail Sausage Rolls with the first bite up to the filling and the second bite over it. Whatever that means, Fannys solution is to make one big one! 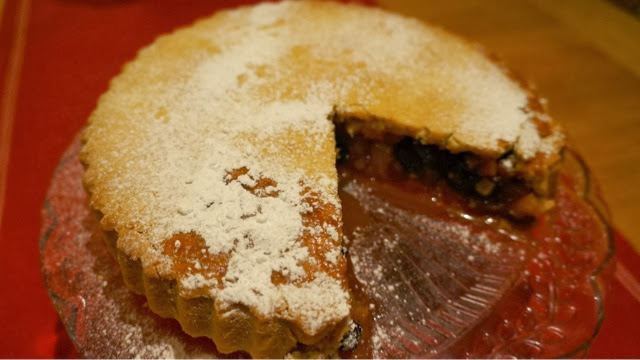 No Cradock collection would be complete without reference to French cookery, and here Fanny tells us that her French twist on the classic mince pie is 'almost more popular'. She doesn't really sound convinced, however her Mincemeat Galette using discs of crisp and flaky puff pastry slapped onto trays, baked and served with cooked mincemeat in the middle, are lovely! I think the puff pastry twist must've caught on going by the offerings available in my local supermarket this year. 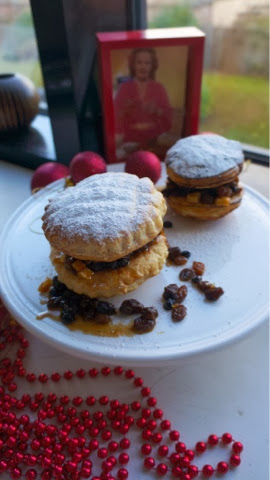 Continuing the French theme, Fanny would now have us combining mincemeat and home made pancakes, or crêpes, in a baked dessert. The pancakes can of course be made in advance and stored in between greased sheets of paper in an ordinary domestic freezer and rescued to be used when required. Roll up some mincemeat in the pancakes, dust with icing sugar and bake - or pass them to poor darling Sarah to do so - until piping hot! They are actually great, I had forgotten how satisfying pancakes were. 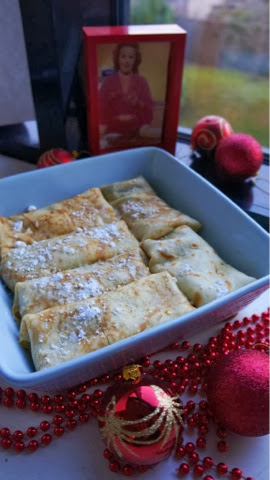 Fanny is so particularly proud of her next invention - a mincemeat filled Swiss Roll, using her never crack recipe to wow your guests over the festive period. It was the first recipe I tackled in this blog, and again worked a treat for this. Simply replace jam or cream with cooked mincemeat and voilá... Fanny says she uses one that is a fortnight old, but I made one fresh. Mine didn't crack, but don't look too closely at Fannys on TV, just saying... 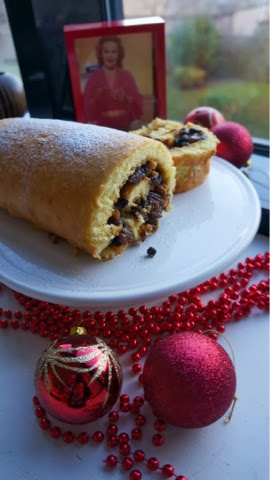 Fanny saves the dish she is most pleased with in her mincemeat story until last, and despite her pride I doubt it went down well in the 1970's and still today seems quite stomach churning - the Mincemeat Omelette. It is essentially an omelette richly filled with mincemeat and dusted liberally with icing sugar quicker than you could snap your fingers and chastise poor darling Sarah for being in the wrong place at the wrong time, taking away the wrong equipment. It tastes as you'd imagine, no matter how much icing sugar is sifted on top. Perhaps this was made as a punishment for poor Sarah to keep her in line? Fanny shares all these recipes selfishly but gets great pleasure in doing so, as a salute to housewives everywhere who will try to feed their families well over Christmas. Although remember, there is no need to merely try, it's all in the booklet... 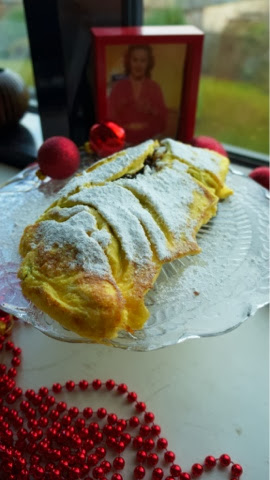